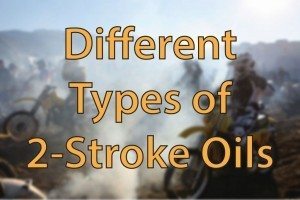 You probably already know the difference between 2-stroke and 4-stroke oils, but just in case you don’t, 2-stroke oil is mixed with the fuel and lubricates the engine while being burned, and 4-stroke oil stays in the crankcase.  As such, two-stroke oils need to have lower ash content to minimize deposits that form as a result of combustion. The different types of 2-stroke oil for dirt bikes can be divided into three main categories; conventional (petroleum-based) oils, castor oils, and synthetics.

Related: What is “octane rating” and how does it affect your dirt bike’s performance?


Castor-based oil is my oil of choice (for several reasons I won’t get into here).  It’s relatively similar to other vegetable-derived oils and has been used in high-performance engines for many years. It’s chemical composition enables it to polymerize when subjected to high temperatures to form a sticky “wax.” Because this wax has lubricating properties, it can still separate metal surfaces, albeit for a short time, in the event of oil starvation (lean ratio).

This makes it less likely to get squeezed out when pressed between two surfaces. Another of castor oil’s appealing attributes is its “wetting” ability, which is the tendency to spread out to cover an entire surface. These two qualities make castor oil ideal for high-performance 2-stroke engines where the contact pressure on connecting rod bearings and other elements is very high, especially at higher RPMs.

However, the presence of natural components like gums in castor beans can present a drawback. Since they don’t burn well, they tend to leave a mushy residue that could build up on your cylinder walls and piston, among other issues. Though modern castor oils have less gum and don’t leave as much carbon as their traditional cousins, this is still something you need to be aware of when finding the oil for you.

Nevertheless, castor oils are great for high-performance engines. They seek out hot zones in the engine and stick to the surfaces better than conventional oils. Those seeking to scavenge every last bit of performance from their engines should consider using castor oil.

Synthetic Oil – Performance At A Premium


These are made from different organic and synthetic compounds that offer excellent surface-wetting properties and burn clean. In comparison to castor oils, these are highly soluble in methanol and gasoline. Synthetic 2-stroke oil for dirt bikes also transfers heat more efficiently and doesn’t deteriorate with time. They also leave fewer deposits when burnt, which eliminates the hassle of scraping carbon deposits from the engine. Synthetic oils generally out-performs petroleum-based oils, especially at extreme temperatures and loads.

WARNING! – PERSONAL OPINION. The only difference between castor based and synthetic 2-stroke oils is the preference.  I haven’t seen a noticeable difference in performance among all the 2-stroke dirt bikes I have owned. So the decision is between using a naturally renewable resource and something cooked up in a lab.  The only drawback of using castor oil in your bike is the residue build-up, but if you service your top end regularly, it won’t be an issue.  If you neglect the maintenance to the point that castor residue build-up is affecting your motorcycle’s performance, it will be the least of your worries. *COUGH* blown engine *COUGH*


These are derived from crude oil through a complex filtration and cleaning process that removes the various contaminants. Petroleum-based oils are generally cheaper in comparison to their synthetic counterparts. They are known to provide superior rust protection besides good all-round performance. However, they’re not as clean-burning as synthetic and lack the film strength vital for withstanding high loads and temperatures. petroleum-based 2-stroke oils are primarily used for low-performance engines and constant RPM 2-cycle engines found on lawn tools, outboard boat engines, and other similar applications where performance isn’t significant.

This should not have to be said, but DO NOT use conventional 2-stroke oil in your dirt bike! Unless you have nothing else, in that case, one time shouldn’t hurt.

*SIDE NOTE – Conventional 2-stroke oil IS ideal for snowmobiles and other cold-weather applications because conventional oil is less likely to separate at low temperatures.  In this case, the engine is designed to work with conventional oil.

There are so many options available when selecting 2-stroke oil for dirt bikes in today’s market. To choose the best oil for a specific application, attention needs to be paid to the engine manufacturer’s guidelines. As you get acquainted with your dirt bike and its particular needs, you’ll eventually find the best option that ensures both reliability and performance.

Or… OR… you could go by the manufacturers suggested oil… as long as it’s not conventional!

Keep Reading – Can You Trust A 2-Stroke Oil Injection System?

Motorcycle Oil vs Car Oil – Know The Difference, Save Your Bike

2-Stroke vs 4-Stroke Oil – Knowing The Difference Will Save Your Motorcycle!

What Is Blended Synthetic Oil? Pros & Cons Of Using It In Your Dirt Bike