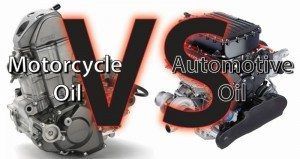 What Are The Major Differences Between Motorcycle Oil vs. Car Oil?

You might be tempted to think that changing the oil in a car is just like changing the oil in your motorcycle. While the physical process is the same, the wrong oil can cause severe damage to your bike, as in “cracked case, do I fix it or sell it?” damage.  This is an understandable mistake, though, because to anyone new to riding, oil is oil. And when comparing the prices of motorcycle oil vs. car oil, the novice rider will be tempted to go for the $3 quart of motor oil over the $7 (or more) bottle of the correct oil.

So, why can’t motor oil be used for motorcycles? To understand this, it’s vital that you first know the critical differences between automotive and motorcycle engine applications. The most significant difference is that motorcycle engines tend to operate at higher RPMs. And, especially with dirt bikes, the engine continually travels the full RPM range.

Related: Can you increase your fuel economy with off the shelf gadgets? No, that’s dumb.

This is why you service your dirt bike oil by hours, not miles.

This means that motorcycle engine components are subjected to significantly higher stress levels as compared to cars. The result of this is higher lubricating demands placed on oils, in addition to higher loading and shear forces. Also, because most motorcycle engines do NOT have an oil vent large enough to equalize case pressure, if automotive oil is used, the pressure will build up in the crankcase, causing the “do I fix it or sell it?” scenario above.


Understanding motorcycle oil vs. car oil systems is critical. In most motorcycles, a pump supplies oil to both the engine and the transmission.  And In most dirt bikes, nothing but gear movement disperses the oil in the crankcase. Because of this, the oil needs to meet different lubricating requirements of both the engine as well as the transmission gears. Conversely, these two components are always separate in cars and have their own lubrication needs.

Most car engine oils have a component known as a friction modifier, which reduces the level of abrasion between engine components in an attempt to improve fuel economy. Friction modifiers will cause the clutch to slip when used in motorcycles, due to the wet clutch design most motorcycles use. Automotive lubricants also contain detergent additives whose ash content is relatively high. If used in motorcycle engines, these could result in the formation of deposits on the piston crowns as well as the valve train. This will cause perforation and burning of the components.  Detergents are the primary cause of pressure build-up, and without an adequate oil vent, we’re right back to the cracked crankcase problem.

These oils need to be formulated to handle the transmission, more specifically, the wet clutches found in most bikes. The oil needs to be slippery enough to protect the engine, but not too slippery. Small engine oils need to compromise to make up for the absence of friction modifiers. Adding special anti-wear additives to reduce friction on both the engine and transmission solves this problem. These additives are necessary for both 2-stroke and 4-stroke oil. Other extra components include anti-scruff and extreme pressure additives. As a result, the oils tend to be more expensive than their automotive counterparts.

The oils also have varying levels of viscosity, even though the two are classified at the same level. Motorcycle oil is usually made thinner to lubricate the smaller engine components better and more easily. A higher viscosity level would result in increased gear pitting.

In a nutshell, the best formulation for motorcycle engine oils means striking the perfect balance between clutch performance, engine, and transmission protection. These considerations aren’t usually taken into account during the manufacture of car engine oils. So when it’s time to change your oil, make sure the bottle has a picture of a motorcycle on it!

2-Stroke vs 4-Stroke Oil – Knowing The Difference Will Save Your Motorcycle!

What Is Blended Synthetic Oil? Pros & Cons Of Using It In Your Dirt Bike