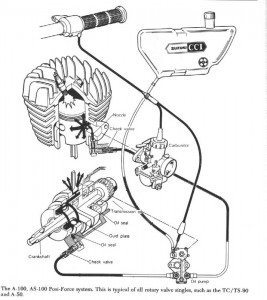 Ever since the two-stroke engine gained mass appeal a few decades ago, debates have been waged in various communities (dirt bike included) over whether the 2-stroke oil injection system was a solution or a disaster waiting to happen.  Those debates are just as intense today; however, over the years, research and experience have changed some riders’ views on the subject.

In this article, we’re going to weigh some of the injection system’s benefits versus some of its significant risks.  From there, you’ll be able to form your own opinion on how beneficial you find oil injections systems to be.

The Difference Between Premixes and Oil Injection

Let’s go ahead and state the obvious – all internal combustion engines must-have oil to operate. However, specific engines receive their oil in different ways.  For example, four-stroke engines receive their oil via the top of the engine. It then flows down to the oil pan and is circulated throughout the engine and oil filter.  Two-stroke engines work completely differently.

The common two-stroke engine (be it lawn equipment, dirt bikes, outboard motors, etc.) receives its oil via being mixed in with the engine’s fuel, called premixing.  Depending on the engine, there will be a set ratio of oil that must be mixed in with the gas to achieve the proper lubrication.  Get the ratio wrong, and you risk damaging the engine.

As an alternative to premixing oil, oil injection systems became popular in America in the late 60s and early 70s when foreign-made motorcycles began dominating the market.  The oil injection system made applying oil to the engine very similar to the 4-stroke engine, which created a couple of immediate advantages to premix (which we’ll cover in just a minute).


The typical injection system is simple in its operation.  The oil (usually a little over a quart for most bikes) is poured into the oil tank where it is fed to the oil pump.  Instead of having only one throttle line, the bike will have two – one traveling to the carburetor and the other to the oil pump. When the throttle is opened, the oil pump then feeds oil to both the crankcase and intake manifold.  In the manifold, the oil will mix with the gas and air and make its way into the bike’s engine.

The Advantages Of 2-Stroke Oil Injection


The first advantage that sticks out in most people’s minds in regards to oil injection systems is the ability not to have to measure and premix oil with the gas every time you fill-up the gas tank.  This is one of the main reasons why you’ll find old road bikes with injection systems. It’s much simpler to stop at a gas station and fill up.  With Premix, you need your gas can and premix oil. Then mix it to the right ratio at the pump, and then fill up your bike.

The second advantage also involves not needing to worry about premixing.  With premixing, it’s important to get the right ratio of oil-to-gas to maximize engine performance and prevent potential future engine issues.  And unless you run the tank to empty before filling up every time, this can prove to be quite tricky sometimes.  With an oil injection system, you don’t have to worry about premixing.  You simply pour the oil in its tank and the gas in its tank, and you’re ready to go.  Keep in mind there are several types of 2-stroke oil out there; make sure you use an injection compatible formula.


While regarding convenience, it appears that oil injection systems are the clear winner. However, there are quite a few costly disadvantages to using injection versus premix. While taking good care of your dirt bike is mandatory to keep it running for years to come, it is far more tedious to keep an oil injection bike running smoothly, and the results of not doing so are much more costly.

Not priming the system after the fuel tank is empty is one common mistake many first-time oil injection owners make.  Most 2-stroke oil systems do not prime very well. Your engine can run without properly priming the system.  However, during that time, the system is not primed, your engine is only receiving a fraction of the oil flow it should.

Winterization is also a major concern with oil injection systems.  Many riders do not properly winterize their bikes when the cold season hits. And as a result, plugs can form in the lines due to the old oil. This can also lead to oil starvation and a blown engine.

Related: Caster 927 is one of the best premix oils you can buy!


The ability to add oil separately without premixing is a nice convenience. It’s not a convenience that’s worth damaging the engine beyond repair.  With premixed gas, I know that the oil is going where it needs to go.  Due to the delivery system established in oil injection systems, that’s never a guarantee.

If it were my personal choice, I would go with a premix two-stroke any day of the week.

How A 2-Stroke Reed Valve Works

How The Rear Wheel Hub Works On Your Dirt Bike