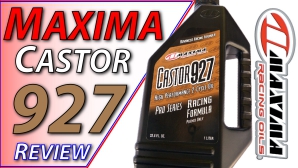 I’m not going to tell you that Castor 927 by Maxima Racing Oils is the best 2-stroke oil for your dirt bike because that’s not the case.  Full synthetic 2-stroke oils will always make more power and burn cleaner than natural, conventional, and blended.

Cleaner power is the whole point of full synthetic oil.  What it comes down to is your personal preference.

I like castor-based oils over synthetic oils for the simple reason that I like nature. I love the way nature looks, smells, the way it tastes fresh off the grill with mashed potatoes.

2-stokes and nature have never mixed, but if I’m going to blast smoke through the trails, I might as well go with something natural and renewable.

Castor oil has been around for a long time and has had MANY uses over the years, but I won’t get into that in this review.

At least these USED to be problems with castor 2-stroke oil.

Maxima Racing Oils has taken the refinement process as far as it can go while still keeping its castor oil mostly natural. Yes, I understand that when refining an organic material to match the performance of full synthetic oil, unnatural chemicals are used, but Maxima has managed to keep Castor 927 as natural as possible.

The main drawback of using castor-based 2-stroke oil is residue build-up.  Fortunately, gunk building up in your cylinder is no longer the issue that it used to be, thanks to the advanced refinement processes available today.  Yes, some residue will build up in your cylinder, but it won’t be enough to cause you problems.

This claim is based on servicing your cylinder at regular maintenance intervals.  If you never perform maintenance, your bike, cylinder residue build-up will be the least of your problems. Click here for a great price on a new piston!

When I say “shelf” characteristics, I’m talking about how the oil will change in the bottle.  Castor oils used to be significantly affected by temperature.  Hot weather will thin out, and cold weather will make it thicker. (All oils change with temperature, but castor is more affected by it).

Again, Maxima has worked their magic and has almost eliminated this issue.  The shelf characteristics of Castor 927 stay consistent from around 20, up to 105 degrees.  That being said, the shelf qualities of ANY 2-Stroke oil will change once mixed.

That said, I have taken Castor 927 from 10 degrees in Minnesota to 115 degrees in Texas, riding the same dirt bike with consistent performance.

Castor 927 matches other full synthetic 2-stroke oils in price and performance, so if riding green(er) means having a little residue build up in my cylinder, I can live with that.

It’s Important to note that Castor 927 2-stroke oil is a PREMIX and is not suitable for oil injection systems.

Now that I have my personal opinions on Castor 927 out of the way, let’s take a closer look at the details.

You’ll find that most reasonably priced, decent Two-stroke oils will generally possess two out of the three characteristics. However, they always seem to fall short in the other category.

However, Maxima Racing Oils’ Castor 927 2 Stroke Oil seems to break the norm. It boasts a high rating in each category: combustion, lubrication, and little build-up.

• Runs cleaner than other castor based oils

The Benefits Of Using Castor 927 By Maxima

When compared with other similar brands, Maxima Castor 927 has displayed the following benefits:

• The unique blend (refined castor oil, a special synthetic, and a special additive system) is proven to reduce carbon and gum formation and prevent rust and corrosion.

• Maxima Castor 927 keeps power valves cleaner for longer than other brands. It also ensures that the valves operate correctly.

• It smells great and doesn’t give off THAT much smoke unless your carburetor is jetted wrong.

What Other Riders Are Saying About Castor 927

While Maxima Castor 927 has been proven to be effective at reducing engine build-up and preventing rust and corrosion in your dirt bike, the real results I’m more concerned with are from people who have used the oil.

Here is a little of what riders have to say about it:

One rider has used Castor 927 for four years in a CR500 with no issues. He says that he hasn’t had any fouled plugs or scuffing on the piston.

Another rider uses it in his CR250 at a 40:1 ratio and says it doesn’t smoke much and smells the best out of all other premixes.

These types of reviews are a common trend with the Maxima Castor 927. The oil is top-quality; there’s no doubt about it. The most common praise the oil receives is about its excellent lubrication properties and its great smell.

Based on what I’ve found from my research and personal experience, I would have no problems giving Maxima Castor 927 my full recommendation (I use it in all my project dirt bikes). It seems to uphold the standards that Maxima Oil requires in its products, and the reviews from consumers seem only to back that standard up.

Get a bottle to try for yourself HERE!

Watch This Video To See Me Ramble About Castor 927!