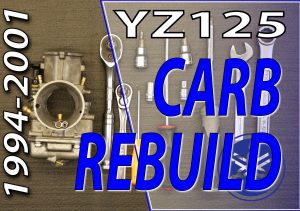 The Tools You Will Need

The Parts You Will Need

If you need parts and tools, you can get everything you need on Amazon.com!

This carburetor is a Mikuni TMX38 found on the 2001 Yamaha YZ125. The 1995 – 2000 YZ125 came with a TMX36. They are very similar, so this service will cover both models. The 1994 Yamaha YZ125 came with a Mikuni TMX35, which is significantly different from the TMX36, so this service will not apply to that model directly, but it will be close enough.

The TMX line of carburetors has two weak points; the jet block gasket and the float valve O-ring. If you are having rich condition issues tuning your 2-stroke carburetor, these are usually the problem.

So before you even take your carb off your bike, I recommend you order the JD Jetting JDMK05 – Mikuni TMX Jet Block Gasket Kit. It comes with the gasket, 2 O-rings, and the Torx bit needed to remove the jet block.

Before you start, here are the carburetor components and where to find them.

Float levels are all over the place between model years, if they even have them.

Almost every year had a different float level, so make sure to check your model year carb specs here.

This carb has no float level specified, but it does have a fuel level specification. Of course, I need a special tool to measure the fuel level, and I’m not going to buy it.

A good rule of thumb is to set the floats parallel to the carburetor body.

Even if I have no measurements to go off of, I can tell these floats are WAY out of adjustment because the tab is bent way up, and the valve closes long before the floats reach parallel.

So I’m going to set my floats at parallel and keep this in mind while tuning the carb. If I find myself with an extremely lean or rich condition, I can start here.

My bike is completely stripped, so Imagine the throttle cable is still attached to the bike.

Even though my slide is de-chromed, it’s still in one piece. I can use it, but I will be replacing it sooner than later.

If you have any questions, please let me know in the comments or on social.