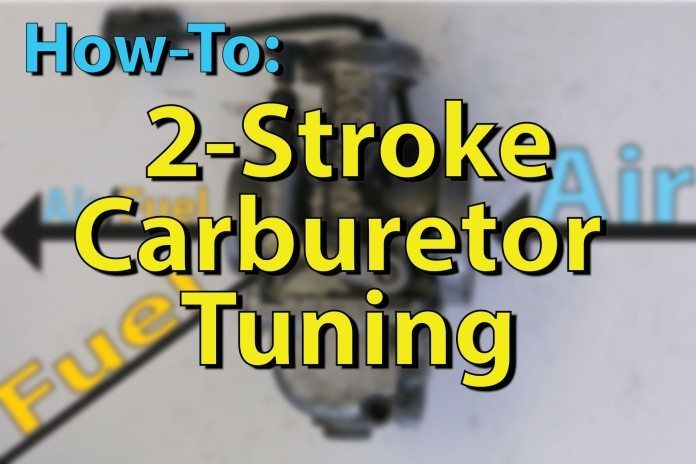 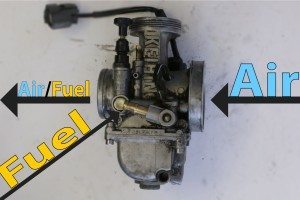 Almost all 2-stroke carbs operate the same way. Although some may have different configurations or features, they all do the same thing – mix fuel and air.

Knowing how to change your jets and needles is one thing, but it won’t do you any good if you don’t understand how the changes will affect your dirt bike.

Parts of the Carburetor and What They Do

The slow jet works with the pilot air screw. This system controls the air-fuel ratio from closed throttle to ¼ throttle. The slow jet draws fuel from the bowl and mixes it with air from the pilot air jet passage. The atomized air/fuel mixture then passes into the throat of the carburetor. Turning the pilot air screw in will richen the air/fuel mixture while turning the screw out will lean out the mix. The slow jet is interchangeable with jets that will provide a leaner or richer air-fuel mixture. Replacing the existing slow jet with a higher-numbered jet will make the mixture richer, while a lower-numbered jet will make the mixture leaner.

The jet needle is connected to the throttle valve and controls the mixture from approximately ¼ – ¾ throttle. The needle seats into the needle jet and regulates the air-fuel mixture from the jet to the carb throat. During your 2-stroke carb adjustment, pay close attention to the needle. The jet needle regulates fuel by its taper, diameter, and clip position. In the closed throttle position, the tapered needle shuts off flow from the needle jet. As the throttle is opened, the needle allows fuel to pass by the taper and between the straight portion of the needle and jet wall. The position of the needle in the jet can be adjusted by removing the needle clip and positioning it on a higher or lower groove in the needle. Raising the clip will lower the needle into the jet, creating a lean mixture; lowering the clip will raise the needle, creating a rich condition.

Why Proper Carb Tuning Is Critical For 2-Stroke Engines

Improper 2-stroke carburetor tuning will have a much more significant effect on a 2-stroke engine than a 4-stroke because the premixed oil lubricates the crankshaft.  A rich mixture will cause poor performance, but a lean mixture can destroy your engine (over time).

At its most basic level, an engine is just an air pump, and what is mixed with the air is what makes it run. All a carburetor does is let fuel be sucked into the engine with the air.  This is where the sizing of the jets comes in.

Your carburetor needs to be adjusted according to the ambient temperature, humidity, and altitude of operation due to the oxygen density of the air changing with these variables.

If you have modified your 2-stroke with different reeds or an aftermarket exhaust pipe, you need to account for the increased airflow as well.

Without getting into too much detail, below are some general guidelines on oxygen levels in the air.

If you want to get into the physics of air density, click here, otherwise, the above information will work.

Changing the carburetor jets is how you compensate for changing oxygen density: more oxygen requires more fuel to even out the air/fuel mixture.

There are three ways to tune your carburetor to the temperature and elevation.

With each method, the only way to properly tune your carb is to keep track of every change you make and record the results.

Too Much (rich) Or Too Little (lean) Fuel?

The last piece of the 2-stroke carb tuning puzzle is knowing how to identify an unbalanced air/fuel ratio.

The simplest way to tune your carburetor air/fuel mixture is to look at your spark plug.

You can also determine the air/fuel ratio based on the performance of your dirt bike. If your bike bogs down under acceleration, the mixture is too rich. If you take off quickly, but your bike lacks power overall, the mix is too lean.

Fixing this is as simple as changing the main jet. Then you can go ride, but if you want to dial in the tuning of your carburetor from idle to full throttle, keep going!

Remember when the jets and needle come into play, and test the performance at each throttle position:

Look for The Signs Of A Bad Ratio


Listen To The Bog

There are two types of bogging that will tell you if you are rich or lean.

You will need to start with a general diagnosis and narrow down what needs to be adjusted.

Follow the flowchart below to start tuning your carburetor! Remember to record every change you make along with the temperature and altitude. The following tuning flowchart is based on:

Side Note: If your carburetor is equipped with an idle adjustment knob, set it to a neutral position before adjusting the pilot air screw. (The idle knob is used for quick adjustments to the air-fuel mix and should not be used for tuning.)

**If you are experiencing poor performance, check the following before re-jetting the carburetor!!**

How To Clean Your Carburetor With Pine-Sol

How To Reverse Bleed The Brake Systems On Your Dirt Bike