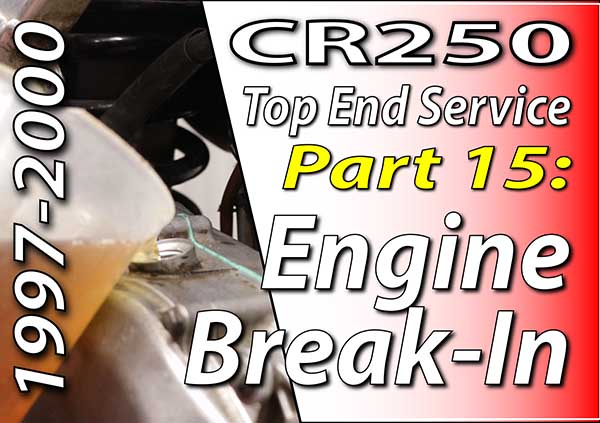 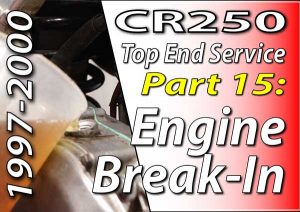 The Parts You Will Need

You should take at least an hour for engine break-in on your CR250. This might seem like overkill but I would rather lock up at five mph in my driveway than 30 mph 5 miles from my truck.

Before you do anything, refill your oil and coolant. Make sure to use a clean filter, spark plug, and freshly mixed gas.

This is also a good opportunity to catch other issues. For example, I spun my bike around, and it suddenly died. Upon further testing, I found a fuel flow issue that was not bad enough to kill my bike while riding, but just enough to cut off fuel when bouncing around.

During the break-in, always bring your environment into consideration.

My shop is between 60 and 75 degrees, and outside is 20 degrees. The transition from warm to cold quickly will affect everything on a dirt bike. Aluminum, seals, and oil will all change, albeit not much, but more than I want in this situation.

This means I need to minimize the time between the shop and starting up in the cold.

Take note of what surface you are on.

The ideal surface is a dry gravel road because if you grab too much throttle, your tire with spin enough to avoid a sudden load on the engine. And if you lock up, you will, hopefully, slide to a stop.

The pavement is a good break-in surface because you have more control over your bike, but you lack the safety net of a loose surface.

The worst surface for a break-in is snow, which is all I have. Break-ins in the snow are always fun because you have to keep momentum while trying not to.

But no matter the surface, make sure it’s as flat as possible.

When braking in your engine, you want to avoid any sudden load, over-revving and lugging.

Kick your bike over inside first to make sure it actually starts, and there are no obvious problems.

You can adjust your idle later if you need to, but for now, it’s important NOT to let your RPMs stay steady.

Get a running start and click into first gear, then ride your dirt bike for about 10 minutes with varying throttle input WITHOUT going over ¼ throttle.

Let your bike rest for 5 minutes while checking gaskets and seals, then repeat the engine break-in process five more times, increasing throttle input by a ¼ turn every second run.

The Break-in Should Go


I know this seems like a lot of work, but every run is a test to see if your dirt bike is going to lock up.

And I speak from painful experience when I say you do not want to lock up your bike moving faster than idle.

After the engine break-in, it’s still a good idea to take it easy for the first hour of real ride time.