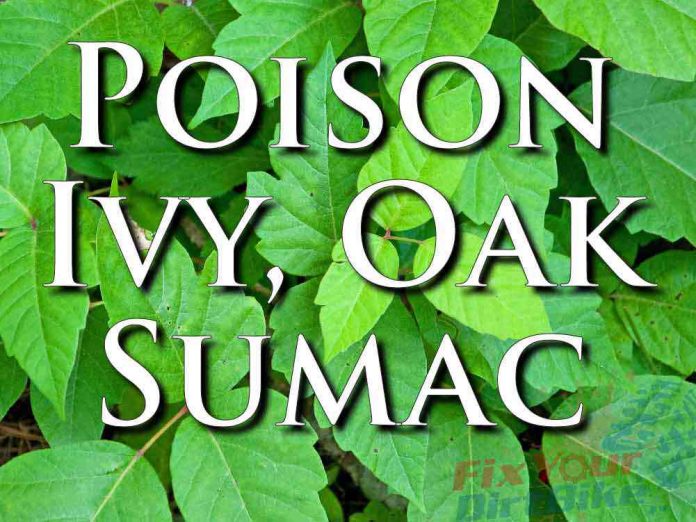 
Do you know what poison ivy is? How about poison oak? Poison sumac? Have you ever had an unusually intense itch? Of course, you have, don’t lie. Think about how crazy it drove you, and how you wanted nothing more than to make it stop. Remember how awesome it felt to scratch that itch and finally get relief? 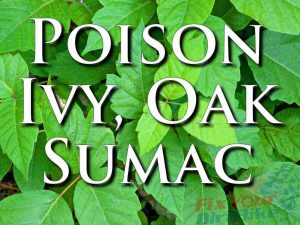 Now, imagine getting that same itch, multiplying its intensity by ten, and having to deal with it for two straight weeks with only the tiniest bit of relief. If you can imagine that, then you’ll have a good sense of how poison ivy, poison oak, and poison sumac work.

If you’ve ever had the misfortune of getting into one of these nasty plants, then you already know the misery that follows your body’s allergic reaction. Worse yet is when you get it while you’re on a long ride or while on a camping trip. Here’s how you can make the best out of the situation using basic first aid.

All three are plants that produce the toxic oil called urushiol (oo–roo-shee-awl, -ol) as a means of protection from potential predators. When these toxins come into direct contact with your skin, they can cause severe itching, rashes, and blisters.

Poison ivy is a vine-like plant that has a red stem with three leaves. Poison Ivy is located throughout most of the lower 48 and is often found along rivers and other damp, wooded areas.


Poison Oak is a shrub-like plant that also has three leaves. Poison oak is located in the western part of the United States and is found mostly in forests and woodlands.

Poison Sumac is a woody shrub that can have up to 13 leaves arranged in pairs. Poison sumac is very prominent up and down the Mississippi River.


Related: Black eyes look harmless but pay attention, the damage may be more than skin deep!

How To Treat Poison Ivy


There’s no treatment for shortening the time of the poison ivy infection. It will have to run its course, which typically takes one to two weeks for the symptoms of poison ivy to completely disappear. But while you can’t speed up recovery, there are steps you can take to prevent the spreading of the toxin and help alleviate some of the symptoms.

There are two different categories of first aid treatment: Immediate (as soon as you discover the first symptom) and Later (once you’re back home).


Related: Treating Cuts And Scrapes From Riding And Crashing


When you go down in the woods, you’re going to be more concerned about your bike, then your gear, then if anybody saw you. Make sure to take a second look at whatever you just went down in. If it’s Poison Ivy, Oak, or Sumac, make sure you get your gear washed off immediately to avoid accidental contact.

How To Treat A Black Eye With Basic First Aid

How To Treat A Cut With Basic First Aid

How To Treat Common Bug Bites On The Trail – First Aid