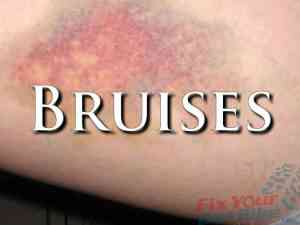 Learn What Causes Bruising And How To Treat It


We’re no strangers to a bruise. With what we put our bodies through during a typical riding day, bruises are very common. We don’t necessarily enjoy them, but we deal with them. 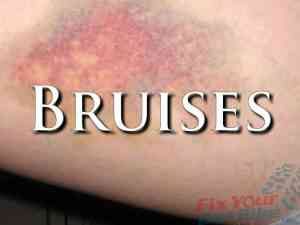 Everyday bruises are rarely (if ever) regarded as being dangerous. And nine times out of ten they’re not. But there are other factors to take into consideration. The major one is how you got the bruise in the first place.

For that reason, it’s never a bad idea to brush up on first aid for bruises. If there is no serious injury, you can at least help relieve the symptoms and heal your bruise faster.

What Is A Bruise?

Bruises (or contusions) will form when blood vessels rupture just underneath your skin’s surface. The rupture will cause blood to seep into the impacted area’s tissue. As a result, darkened spots (often dark bluish and blackish) become visible on the surface of the skin. 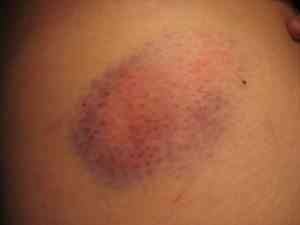 Most bruises are formed from blunt trauma to the body. Falling, running into something, getting struck by something, and other forceful impacts are all common causes of bruises. They can also develop from certain medical conditions, certain medications, and the natural aging process.

The symptoms of a bruise are universally similar but individually different. For example, one person may naturally “bruise like a peach” while another will hardly ever bruise, or bruise very lightly.

How To Treat A Bruise Fast With Basic First Aid


There’s not much basic first aid that can or needs to be done about a bruise immediately after getting one. The pressing concern should always be the investigation and discovery of other, more alarming symptoms (see Step 5).

The bruise should heal naturally in due time. However, there are a few things you can do to help alleviate the pain (if present), reduce swelling (if present), and speed up the healing process a little bit.

If you suspect someone you know has a bruise that looks worse than they think, get them to a doctor immediately, as there isn’t much you can do with basic first aid.

How To Treat A Black Eye With Basic First Aid

How To Treat A Cut With Basic First Aid

How To Treat Common Bug Bites On The Trail – First Aid